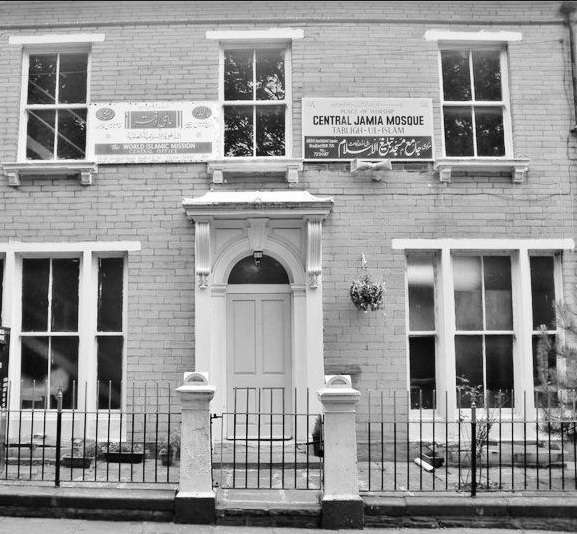 The foundations of Jamiyat charity was built around Southfield Square, Bradford BD8 – this was the very first mosque and community Centre in Bradford of the Sunni Community in the UK. The U-shaped cobble stone road of Southfield Square are a constant reminder of the struggles and challenges of Jamiyat, as it endeavored to serve the community in the difficult period of the 1960s and 70s.

First prayers were conducted in 18 Southfield Square, a small house belonging to Pir Sahib in 1962. This house is still inhabited by Pir Sahib and his family to this day. Prayers, community activities and teaching subsequently moved to 68 Southfield Square, a house which was first bought in 1965 – this house then became first mosque of Bradford. Number 69 was purchased in 1966 and both of the houses were then combined together to make a larger mosque and centre.

During this period, more and more young men were arriving from Kashmir and other areas of the Indian sub-continent to work long hours in the textile mills. The Second World War had a huge impact on the working population of Britain and many young people from the Indian subcontinent, some of whom had fought in the war to support Britain, were now coming to England to work and rebuild the economy.

The cultural mind set of the migrants was a confused one: they didn’t want to invest in Britain in case they had to leave. They were also very curious and apprehensive about the risks of losing their culture and concerned that if their children did come to live with them, how they would cope and hold on to their roots.

In the 1960’s it was typical for many migrants to leave their families in India/Pakistan, work in the UK and then travel to visit their families every so often. May held the view that any efforts to establish a mosque or community centre was a wasteful exercise, as there was a feeling that there was no long term prospect or security in the UK and eventually after they had done their fair share of work, they will return to their native country.

In these circumstances, Pir Syed Mahroof Hussain Shah Arif Qadiri Naushahi worked tirelessly to establish Southfield Square – he was a visionary leader and understood, that whatever the outcome of their status of working in the UK, it was important for the community to prosper and support each other.

Pir Sahib was working in the Hield Brothers Textile Mill at Lower Town Mills in Oxenhope West Yorkshire and despite working long hours, the mission of establishing something for the community came from Pir Sahib’s profound desire and understanding, that once a community prayer centre and facility was established, it was going to become a pillar of service for the community.

During Eid, there would be visitors from out of Bradford, and every year, the queues for people to perform their Eid prayers were getting longer and longer.

IMAMS AND TEACHERS OF SOUTHFIELD SQUARE

Both 68 and 69 Southfield Square houses (purchased for £1100 and £1300) were combined together and the work was carried out by King Builders, who later became the owner of King Fireplaces. The total cost for the conversion was in the region £25,000. Four floors were converted together in this construction project.

During this period, the average salary of the workers in the textile factories was £5-6 pound a week. Southfield Square has been fully refurbished in 2015 and the local community is still very active in the mosque and centre.

There are some future plans to extend the building for community use, approximate cost is £30- 50k.

Your donations and support will be most welcome.